WRC – Tänak on top ahead of Finland’s final showdown 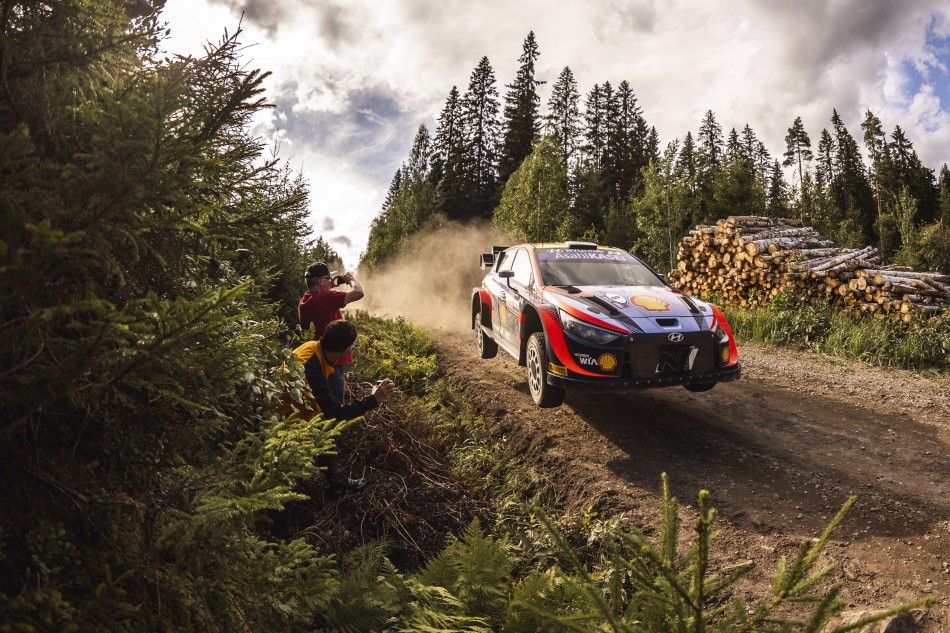 Ott Tänak is closing in on his third Secto Rally Finland victory after keeping a charging Kalle Rovanperä at bay during Saturday’s penultimate leg.

The Estonian driver pushed his Hyundai i20 N to its limits on superfast gravel stages clustered around the Jämsä region, maintaining his position at the head of the field with just four stages remaining.

Wet conditions early in the day weren’t quite to Tänak’s liking, although he arrived back to the mid-leg service in a slightly more comfortable position than when he had left first thing in the morning.

He was more confident on the drier, grippier second pass and set a similar pace with championship leader Kalle Rovanperä, who surged through the field to end the day just 8.6sec in arrears.

The competition in Finland is traditionally very tight and, with Sunday’s itinerary adding up to just 43.92km, Rovanperä would need to be on another level to realistically overturn the leader. That said, he’s carried out similar feats already this year…

Rovanperä was the driver of the day, taking out five stage wins in his GR Yaris machine.

He was hampered by loose road-opening conditions on Friday which left him down in fourth overall, but the Finn blitzed Toyota team-mates Elfyn Evans and Esapekka Lappi to climb the order.

Lappi was feeling frustrated after his car scooped up a stray rock on SS16 which cracked the windscreen, drastically reducing visibility. He had to err on the side of caution over countless blind crests and trailed Rovanperä by 26.8sec to fill the final podium spot.

Evans, too, was in trouble. His Yaris took a heavy compression on the penultimate stage which damaged the rear left upright and suspension strut.

Frantic repairs were made using ratchet straps and cable ties and the Welshman nursed the car through Vekkula 2, dropping almost one minute while amazingly still holding his position in fourth overall.

Thierry Neuville’s Hyundai squad fitted new differentials to the car overnight and he enjoyed a drama-free day. The Belgian was a lonely fifth overall – 45.8sec behind Evans but with 42.0sec in hand over Toyota youngster Takamoto Katsuta, who threw away time with a series of spins.

M-Sport Ford duo Gus Greensmith and Pierre-Louis Loubet were in a battle of their own for seventh overall, with Loubet setting the early pace before being overtaken by his Puma colleague on SS17. The pair will start the final leg just 4.2sec apart, while Hyundai Motorsport N’s Teemu Suninen and Toksport WRT2’s Emil Lindholm rounded off the leaderboard in FIA WRC2-specification cars.

Suninen topped the category by nearly 20 seconds after dominating the opening leg but saw his advantage almost halved in Saturday’s opener when a mysterious issue left his Hyundai i20 N Rally2 down on power.

That issue was quickly cured and from that moment onwards he and Lindholm were evenly matched, each claiming four fastest times in changeable conditions.

A faulty starter motor meant Lindholm had to jump-start his Škoda Fabia Rally2 several times, but it didn’t affect his speed on the stages and the 26-year-old ended the day just 10.7sec behind as well as top WRC2 Junior.

Craig Breen was the day’s only frontrunning casualty and retired from fifth overall in the second stage. The Irishman misjudged his line over a high-speed jump, colliding with a rock which ripped a rear wheel from his Puma.

Fabia pair Mikko Heikkilä and Sami Pajari were both in contention for third overall before being forced into retirement. Heikkilä rolled at Rapsula 1, while Pajari’s early bath was caused by a broken track control arm.

Their misfortunes enabled Egon Kaur to complete the podium in a Volkswagen GTI R5, although the Estonian driver trailed the leaders by 1min 39.7sec at close of play.

In FIA WRC3, Lauri Joona is just four stages away from his second class victory of the season thanks to a flawless Saturday.

The 25-year-old won all eight stages despite nuring a minor technical issue on his Fiesta Rally3 and headed Jan Černý by 3min 34.7sec approaching the rally’s final day.

Henri Timonen completed the podium 12min 34.3sec further back, while Finnish teenager Toni Herranen plummeted from second to fourth overall when he hit a rock in the second stage of the day.

The provisional results can be consulted here.