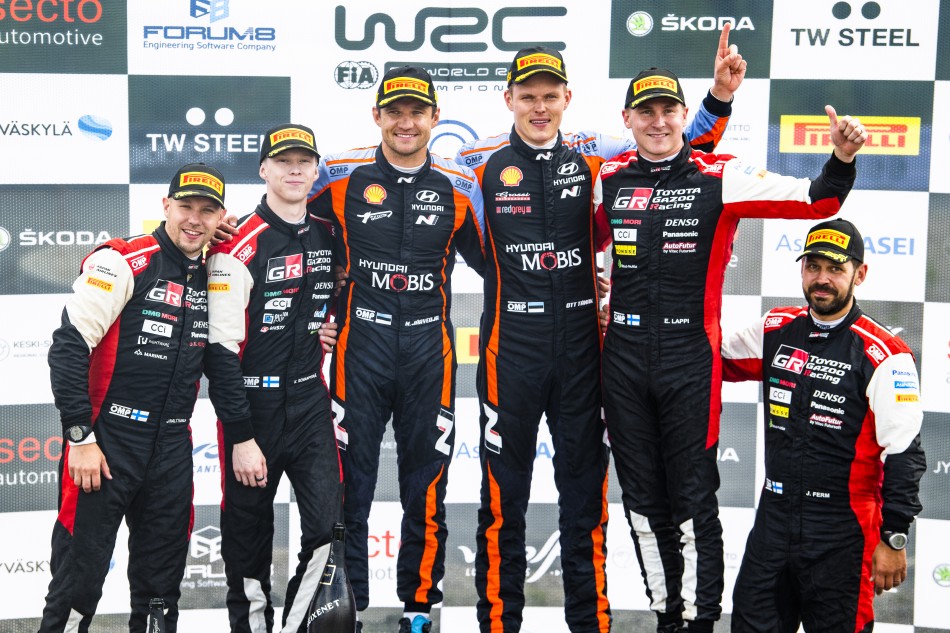 Ott Tänak secured Secto Rally Finland victory on Sunday afternoon to give Hyundai Motorsport its first ever triumph in Jyväskylä with a precision-perfect drive.

The Estonian driver led from the second stage of the rally to finish the four-day gravel road fixture 6.8sec clear of Toyota GR Yaris rival Kalle Rovanperä – clinching his third Finland success in the process.

Tänak found it difficult to be comfortable in his Hyundai i20 N from the get-go but was still able to produce top times throughout thanks to hard grit and determination.

As Friday’s road-opener, Rovanperä was slow out of the blocks but reeled off five stage wins on Saturday to climb from fourth to second overall. He ended the penultimate day just 8.4sec in arrears after slicing the deficit in unpredictable conditions.

Dry conditions ensured further fast-paced action in Sunday’s closing leg, but Tänak was in no mood to compromise. He gave just 1.8sec away to his rival over the four speed tests and stood atop the podium for the first time since Rally Italia Sardegna in June.

Rovanperä virtually resigned himself from a maiden home victory after Sunday morning’s first pass of Ruuhimäki, where he and Tänak posted identical times. With a solid haul of points in the bag, the 21-year was unwilling to take any unnecessary risks.

He stretched his championship points lead to 94 after eight of 13 rounds, while his Toyota Gazoo Racing squad ended 88 points clear in the manufacturers’ standings with three Yaris cars in the top four.

Home hero Esapekka Lappi completed the podium 1min 13.9sec down, but was lucky to even see the finish after rolling on SS21. He used epoxy resin to patch a crack in his Toyota’s radiator ahead of the last stage and powered through with no front windscreen.

Elfyn Evans was 16.9sec behind and conceded time on Saturday afternoon. Like his team-mate, the Welshman also had to pick up the spanners, bodging together damaged rear suspension using ratchet straps and jubilee clips.

It wasn’t Thierry Neuville’s weekend. Set-up frustrations plagued the Hyundai driver and he was never in a position to fight with the leading quartet. He trailed Evans by 40.4sec in fifth overall and slipped to third in the championship behind Tänak.

Greensmith scrapped with colleague Pierre-Louis Loubet for most of the event but the Frenchman retired with mechanical woes before the final stage.

In eight overall, Teemu Suninen scored his first WRC2 victory of the season with success on home soil.

It was almost a lights-to-flag win for the Hyundai i20 N Rally2 driver, who snatched the lead on the first gravel test of the event.

Suninen built up the majority of his winning margin during Friday’s opening leg – winning seven out of nine classic speed tests around Lankamaa and Laukaa.

A brief scare on Saturday morning when the car briefly lost power almost allowed Škoda Fabia Rally2 rival Emil Lindholm into contention, but the pair remained very evenly matched for the remainder of the weekend.

Suninen ended 7.7sec to the good as well as placing eighth in the overall rally standings. It was a much-needed result for the 28-year-old – especially as he previously retired from the lead in both Portugal and Italy.

Ninth overall and runner-up in the WRC2 class, Lindholm took FIA WRC2 Junior honours and moved into the lead of the series open to drivers aged under 30.

In FIA WRC3, Lauri Joona blew away his class rivals to secure a convincing 4min 23.8sec victory in his home round.

The FIA Junior WRC regular won all but one stage across the weekend in the all-Ford Fiesta Rally 3 category despite experiencing steering issues on both Friday and Saturday.

Already carrying a comfortable 3min 34.7sec lead over second-placed Jan Černý into Sunday, Joona did not let up his relentless push and took a clean sweep on all four of the final leg’s speed tests.

His win moved him within a single point of championship leader Sami Pajari, who was contesting the WRC2 category.

Henri Timonen filled the final podium spot more than 17 minutes in arrears, while FIA Junior ERC frontrunner Toni Herranen completed the leaderboard. The Finn had been outpacing Černý on Friday but plummeted down the order when he hit a rock in the penultimate leg.

The final unofficial results can be consulted here.