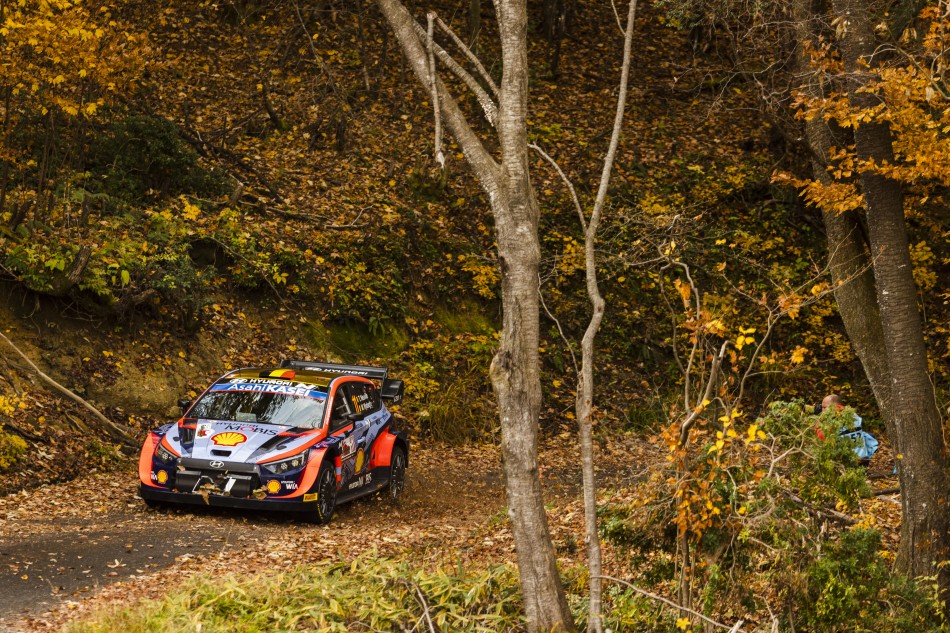 The stage was set for a thrilling final day of the 2022 WRC season and, as the cars roared into morning service for the last time this year, tyres were the talk of the town. Meteorologists from both camps had their work cut out and there were contrasting opinions on whether rain would fall in the early afternoon.

Neuville believed it would and took an even spread of hard compound, soft compound and wet weather Pirelli rubber. Evans, on the other hand, wasn’t convinced and opted for a 50:50 split of hard and soft compound tyres.

It appeared the latter had made the correct choice when he moved to within six-tenths of Neuville after blitzing the Belgian through Asahi Kougen. The excitement was short-lived, however, as disaster struck on the very next test.

A miscommunication between Evans and co-driver Scott Martin saw the duo run wide on a right-hand bend, nudging a kerb with the Toyota’s rear left wheel. The resultant puncture took more than 1min 30sec to change – stopping the victory scrap dead in its tracks as he plummeted down the order.

While rain did arrive for the final two tests, it was no worry for Neuville. He cruised to the finish 1min 11.3sec clear of departing team-mate Ott Tänak, who benefited from Evans’ heartbreak to secure an important 1-2 for Hyundai on the home soil of archrivals Toyota Gazoo Racing.

“It feels great,” Neuville exclaimed. “It wasn’t an easy weekend or an easy year, but to end with a victory after showing a good speed all weekend is a great way to end the season. Our weather guys did an incredible job this weekend, so thanks to them and thanks to everybody.”

Takamoto Katsuta also moved up the order at team-mate Evans’ expense to secure his second podium of the season on local roads. The 29-year-old trailed Tänak by a minute at close of play with Yaris colleague Sébastien Ogier a mere 12.3sec behind.

Ogier leapfrogged Evans – who eventually finished fifth, with a plucky run through the penultimate test. Ending only 2min 23.6sec down on victor Neuville, the Frenchman was left to rue what could have been as he lost almost three minutes with a puncture on Friday morning. Sixth place went to M-Sport Ford’s Gus Greensmith.

Grégoire Munster scorched to the front of the WRC2 category with a wet weather masterclass, edging fellow Hyundai i20 N Rally2 driver Teemu Suninen in the process.

It was, however, Emil Lindholm who wrapped up the WRC2 championship title by finishing third in the category and ninth overall. Ex-Formula 1 racer Heikki Kovalainen completed the top 10 on his WRC debut.